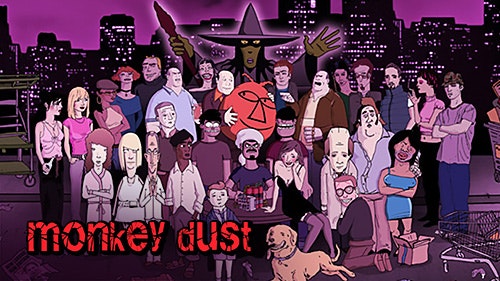 In Praise Of: Overlooked Comedy Classics

For no reason in particular - although in no small part due to a very slow afternoon in the office - I recently started drifting into a chain of thought about funny shows and films that would probably be greeted with blank stares from my workmates if I tried and start conversation about them.

In trying to turn this daydream into an actual list, I mulled over a few possible entrants that seem to have gained enough of a 'cult following' to lose the obscurity required - things like Garth Marenghi's Darkplace for instance.

Maybe you've seen some of the selection below - congratulations on your good taste if so - but if not, then hopefully my heaped praise will motivate you to watch on and enjoy them as much as I have.

So, here are my favourite forgotten comedy classics:

I spent a year living in New Zealand through 2007 into 2008, and much like a previous working holiday in Canada, it made me realise just how lucky we are to have the BBC and Channel 4 in the UK. Having said that, telly down under wasn’t all bad, with a man by the name of Jeremy Wells being one of a few diamonds in the rough.

As far as I’m aware he’s never attempted to take the career leap to the UK or US, so his comedic talents are largely unappreciated outside his home country. Which is a shame, becasue his deadpan delivery makes him the perfect pretend TV host.

Wells is perhaps most famous for Eating Media Lunch, the satirical news digest show that ran for eight series from 2003 until 2009. He’s like a more handsome version of Chris Morris in The Day Today, but taking the piss out of domestic and overseas TV clips a la Charlie Brooker’s Newswipe.

Not content with spearing popular culture, Wells mixed silly and cerebral with the Unauthorised History of New Zealand, which over four seasons from 2005 to 2009 took a thematic tour of his country.

Using a wealth of archive clips, talking heads and dramatically-shot pieces to camera, the show brilliantly sent up the documentary genre. Focusing on the weirder aspects of New Zealand’s past and present, Wells gently ribs his fellow Kiwis and gradually exposes something of the national psyche.

Personally, I found it genuinely useful in trying to assimilate with the locals’ pop culture references. But even if you have no intention of visiting the land of the long white cloud, this is the perfect riposte to the more po-faced factual programmes littering BBC4.

Just over the ditch, comes some more warm-hearted comedy that attempts to reveal something about the average Aussie.

Certain lines from this film will raise a smile among just about any antipodean you'll meet, but sadly this cult classic never really surfaced on our side of the world. The 1997 production focuses on the Kerrigan family, living in a blue-collar suburb of Melbourne, fighting against government compulsory acquisition due to a new terminal being built at the neighbouring airport.

When offered a significant sum to sell his ‘Castle’, patriarch Darryl responds with a line that distils the film's emotional essence: "You can't buy what I've got". There's an endearing story arc of eventual redemption, breaking down class boundaries and getting one over on ‘the man’, but the best thing about the film is just the mundane family life. From finding bargains in the Trading Post and digging holes in the garden, to ropey home improvement and appreciating the serenity.

Dale Kerrigan: [voice-over] Dad also had a way of making everyone feel important.

Darryl Kerrigan: Go on Dale tell him. Tell 'em. Go on tell him.

Dale Kerrigan: [voice-over] Like the time I dug a hole.

Dale Kerrigan: [voice-over] And he would complement Mum every night on her cooking.

Darryl Kerrigan: Well hello. How's this boys. Woo hoo. What' do you call this?

Darryl Kerrigan: and it's got something sprinkled on it.

Starring a young Eric Bana in his first cinematic role, The Castle was apparently filmed in less than a fortnight for well under a million Aussie dollars, and went on to gross more than 10 times that.

Do yourself a favour and look this one out, if only to remind yourself that comedy doesn’t have to be nasty.

Having said that, if you do like your laughs derived from misery, then arguably one of the darkest shows to ever grace British telly was Monkey Dust.

A lot was packed into the three series run on the BBC from 2003 to 2005. From the increasingly depraved late-for-dinner excuses of Clive Pringle, to the unwillingly exonerated Meat Safe Murderer Ivan Dobsky, this was a cartoon definitely not suitable for children.

I dearly wish co-creators Harry Thompson and Shaun Pye had kept on pumping out these brilliantly dystopian characters, but the former Have I Got News For You producer Thompson died in 2005, so they’ll sadly be left to gather dust on DVD shelves and gradually be deleted from YouTube accounts.

Featuring various styles of animation, sourced from different production companies, all sketches shared the same vein of black comedy. Clever transitions and perfect music selections were another hallmark of the show – Goldfrapp’s ‘Lovely Head’ and Boards of Canada’s ‘Aquarius’ will always bring back certain scenes for me.


While much of what was being sent up is very 90s - Britpop, the paedophilia scandals, etc - there are plenty of prescient points and observations that still ring true – dinner party wankers, how cars get names, the reassuring voice of airline pilots, bloody cyclists.

I Am Not An Animal

Dreamed-up and directed by Peter Baynham for Steve Coogan's Baby Cow production house, this 2004 one-series run had the feel of their Chris Morris and Armando Iannucci peer group.

The cast confirms this, with Coogan voicing two characters, alongside the likes of Kevin Eldon and Julia Davis. The break with tradition was to do with the medium - in this case a wonderful cut and paste animation style which gives the whole thing  surreal freedom that I really enjoyed.

The premise is that in the laboratory Vivi-Sec UK, an experiment is underway to create talking animals. The six creatures live a life of computer-assisted luxury to help develop their human characteristics, but a group of anti-vivisectionists break them out, and after an accident, they escape into the outside world, assuming that - in a Planet of the Apes nod - they're in an alternative reality where only humans can speak and the other animals are enslaved by them.

They take shelter in an elderly lady's house, who calls her psychiatrist to tell him that talking animals have moved in, getting her sectioned and leaving the horse, rat, monkey and cat to fend for themselves. Of course, given their upbringing, most attempt to fit into the human world, with literary pretensions and attempts at stardom (whenever I read quartto formaggio on a pizza menu I can't help singing Glen Belt's catchy tune of the same name).

I love the fact this got through the BBC comedy commissioning process, because it's a truly bizarre creation. A bunch of very talented people, riding high on the success of previous projects appear to have been given the freedom to throw everything at the wall and see what sticks. The result is very weird, but frequently wonderful.

I’m not sure how I came across this show, but I consider myself very lucky to have been tipped off, as it only got the one run on Irish state broadcaster RTÉ during 2007-08, after being seen briefly as a pilot sketch on Armando Iannucci's Time Trumpet.

Where the original dealt with a girl leaving her family behind to go to college, the edit imagines her to be a ‘culchie’ from the country town of Buttevant, County Cork, who tries to make her way in big city Dublin. Along with the young woman Esther, other regular characters include the titular Soupy Norman, who repeatedly slurs abuse and tries to punch her dad Jack.

Given the material they’re working with - poorly acted and shot Eastern European melodrama - it’s incumbent on the superb writing and voice acting to make this watchable. Of course, everything has to be roughly fitted into the Polish actors pre-existing lines and repeated scenes, so the dialogue and storylines are very silly.

Maybe it's just because I’ve got a soft spot for rural Irish accents and colloquialisms, but I defy you not to fall in love with this excruciatingly brief and brilliant series.

On a similarly bizarre tip, comes this far more recent, but widely under-appreciated, gem. Continuing the theme of ‘how did they get that made?’ comedies, this one is presumably down to the amount of money the people behind Amazon Prime have got to throw at original content.

Dreamt up by a dream team of Joseph Gordon-Levitt, Channing Tatum and Jon Ronson, the latter two start each episode in an auditorium, presenting Comrade Detective as an influential Romanian television show from the 1980s.

Supposedly produced by the communist government as propaganda opposed to Western imperialism, this Cold War cop show was restored with the help of the Romanian Film Preservation Society and dubbed into English by American actors. Of course it’s all made up, but the lengths they’ve gone to maintain period realism are quite staggering.

Troubled Bucharest detective Gregor Anghel and his partner respond to a drug bust against the orders of their captain, resulting in a Reagan-masked man killing his partner in front of him. Buddied-up with countryside cop Iosif Baciu, they must solve the murder, but in doing so, uncover a plot to indoctrinate society behind the Iron Curtain with capitalism and religion.

It’s a perfect parody of the unlikely pairing buddy cop genre, which lovingly sends up both US and Eastern European stereotypes. As Mr Levitt himself explains, the show has been adopted and praised by both sides of the political divide, but ultimately it's a takedown of tribalism.

Crucially though, this is also a surprisingly engaging drama and very consistent comedy. If you've got Prime due to Millennial shopping laziness, and are currently between boxsets, then give this a whirl and thank me later.

I'm sure I've missed something hilarious, so please let me know which comedies you think haven't got the kudos they deserve.